WILMINGTON, Mass., March 9, 2021 /PRNewswire/ -- UniFirst Corporation (NYSE: UNF), a North American leader in providing customized work uniform programs, corporate attire, and facility service products for business, in partnership with 13-time NASCAR Cup Series champion Hendrick Motorsports, will be debuting a revamped design of the No. 9 UniFirst Chevrolet Camaro ZL1 1LE, driven by 2020 Cup Series Champion Chase Elliott, on Sunday, March 14, at Phoenix Raceway. Elliott will be returning to Phoenix for the first time since November, when he earned his iconic 2020 championship. The race begins at 3:30 p.m. EST and will be televised on FOX. 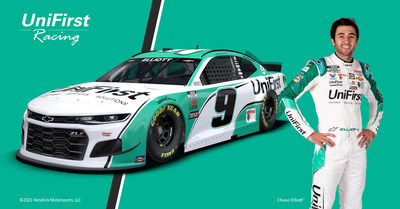 The new-look UniFirst No. 9 Chevy will prominently feature the company's signature green color, complemented by striking black and white contrasts and race-inspired design cues. The refreshed exterior of the No. 9 will easily spotlight Elliott and the car wherever they are on the track.

2020 was a standout campaign for Elliott, as he established himself as the definitive best driver in the NASCAR Cup Series. At only 24 years old, Elliott became the third-youngest driver in NASCAR history to earn the championship following his season-ending victory in Phoenix. NASCAR's three-time Most Popular Driver also compiled five wins and 15 top-five finishes during the 2020 campaign.

Elliott maintained that success while piloting the UniFirst No. 9 Chevy in 2020. The car made its 2020 debut on March 8 at Phoenix Raceway, with Elliott collecting a top-10 finish. In July, he piloted the UniFirst Chevy to an exciting first-place finish and the $1 million grand prize at the popular NASCAR All-Star Race. The UniFirst Chevy's final appearance of the 2020 NASCAR Cup Series came on September 27 at the South Point 400 in Las Vegas. Elliott began the playoff race in the third spot and ultimately earned a Stage 2 victory.

"All of us at UniFirst are excited to join in on Chase's quest for another Cup Series Championship," said Adam Soreff, director of marketing and communications for UniFirst. "From the All-Star race victory to his Cup Series-clinching win, he provided all of us with some unforgettable moments in 2020, and we're hoping for more of the same in 2021."

The 2021 NASCAR season marks the fifth year of UniFirst's multi-year partnership with Hendrick Motorsports, and the company's second year sponsoring Elliott and the No. 9 team. UniFirst continues to be the Official Workwear Provider of Hendrick Motorsports, supplying work clothing and uniforms to the team, as well as to its sister company, Hendrick Automotive Group.

"We're excited to continue our partnership with UniFirst and their thousands of employee Team Partners nationwide," said Elliott. "I can't wait to get the new, bright green and white paint scheme on track in Phoenix – it really looks great. I'm looking forward to building off the successful 2020 season and we're going to work hard to get the No. 9 UniFirst Camaro back into victory lane."

Elliott has already gotten off to a hot start in the 2021 season, compiling one top-five finish, one stage victory, and 73 laps led. As a result, he is currently in fourth place in the Cup Series standings through the season's first four races.

About UniFirst
Headquartered in Wilmington, Ma., UniFirst Corporation (NYSE: UNF) is a North American leader in the supply and servicing of uniform and workwear programs, as well as the delivery of facility service programs. Together with its subsidiaries, the company also provides first aid and safety products, and manages specialized garment programs for the cleanroom and nuclear industries. UniFirst manufactures its own branded workwear, protective clothing, and floorcare products; and with 260 service locations, over 300,000 customer locations, and 14,000 employee Team Partners, the company outfits more than 2 million workers each business day. For more information, contact UniFirst at 800.455.7654 or visit UniFirst.com.